So much fun trying to decide what to post this week!
So many options.
When reading through the weekly challenges at the start of the year I knew I'd be
taking and banking images for this particular week.
I love close-ups of heads and feather detail and eyes!
I don't have the longest of telephone lenses though so can't always sate that desire for the detail, unless the subject is inanimate or, in the case of the feathered variety of critters I photograph, co-operative.
The Morepork I've used for the cover shot was one of the luckiest encounters I've ever had at Auckland zoo.
As I was heading to the exit at the zoo a keeper was walking towards me with this tiny owl on her arm.
He's used for educational purposes at the zoo and was being moved to another enclosure.
She was delighted that I wanted to photograph him and he was incredibly obliging.
I hadn't realised just how little they are and how absolutely beautiful those yellow eyes are.
It was such a treat seeing him up close and personal.

The Gannets I photographed just before lockdown were very co-operative.
I think it had something to do with them being totally enamoured
with one another and oblivious to the likes of me.

Fantails, on the other hand, whilst being one of the friendliest of critters,
are the least co-operative when it comes to staying in one spot!

I photographed the duck during lockdown and she was so trusting.
In fact she seemed to relish my company and displayed no fear that I might harm her.

Mr Galapagos Tortoise was one of the subjects used for the week of scales
but he's also a great subject for 3 views.
He doesn't move very fast either which is an enormous advantage.
All in all, such a fun challenge this week!
at June 27, 2020 No comments: 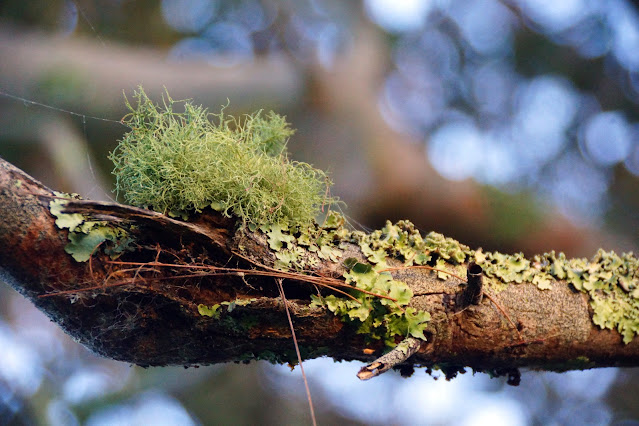 Exploring miniature worlds this week.
So many are hiding in plain sight! 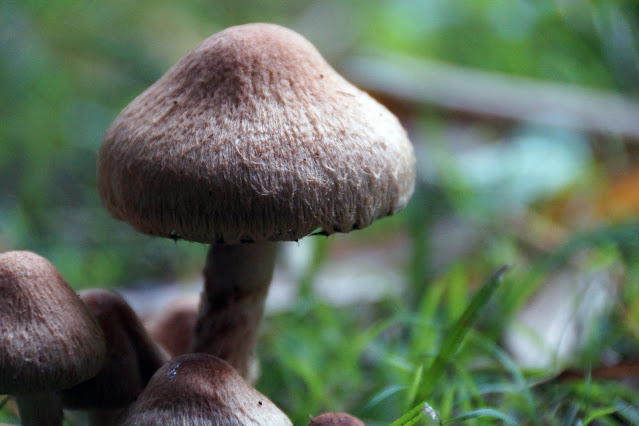 But if you look beyond the obvious - and underneath what's at eye-level -
you see a whole new world that you might not have noticed before. 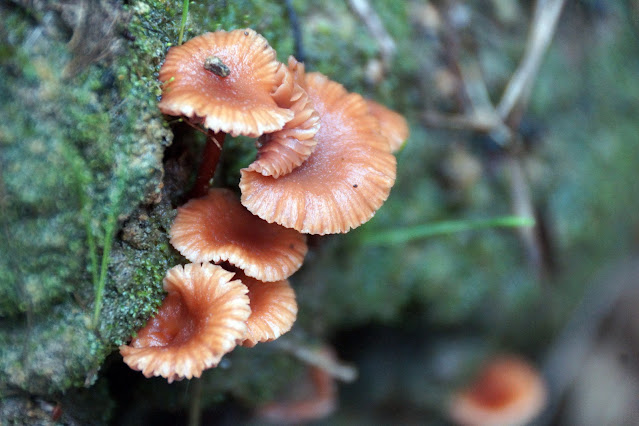 Changing my view has changed what I see.
Now I can't unsee all these miniature worlds. 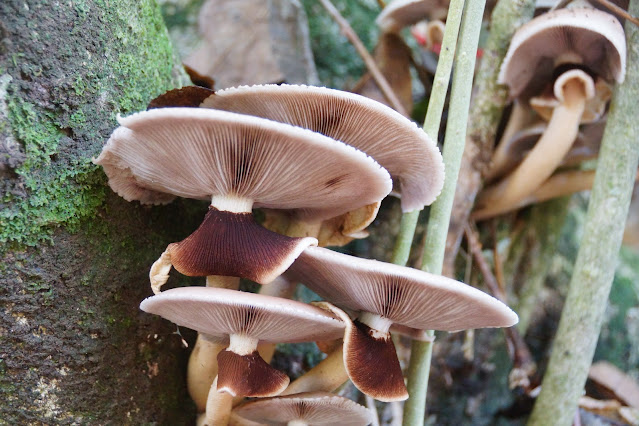 It's been an eye-opener. 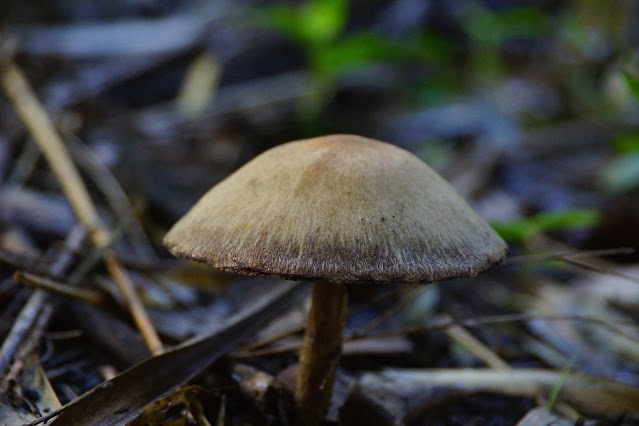 Even the bees pollinating the lavender are in a miniature world of their own. 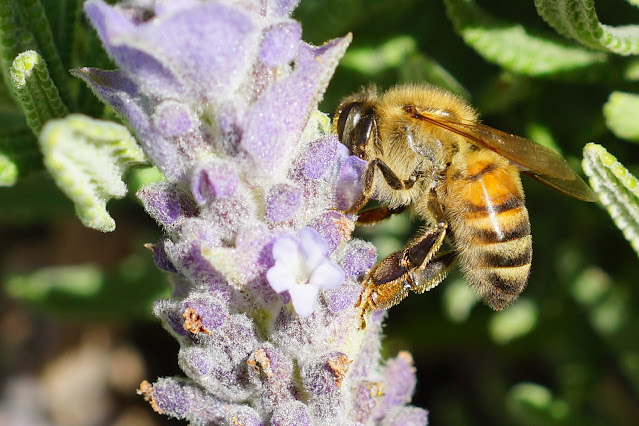 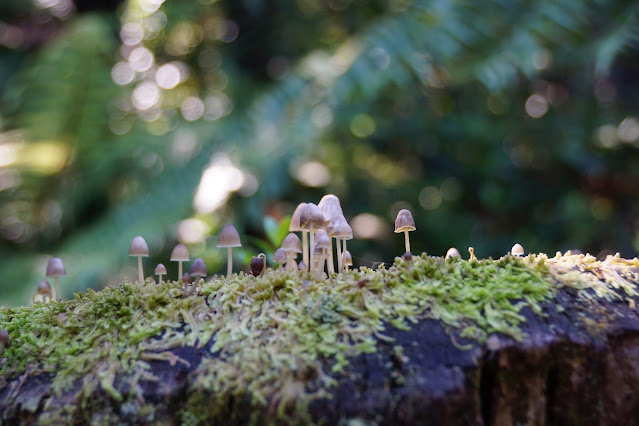 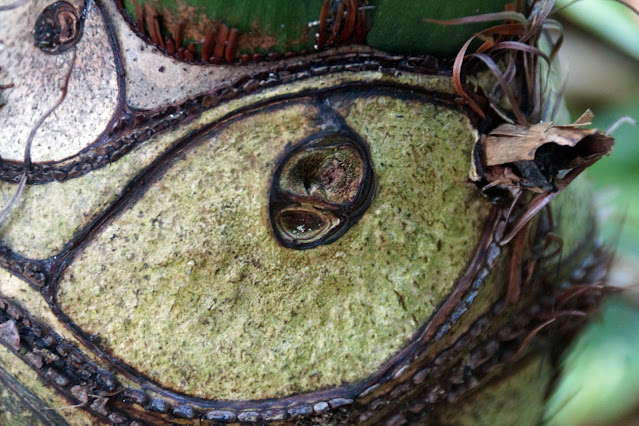 Scales are NOT what I would usually be looking for on my daily walks.
This challenge however persuades one to look for what's not always obvious.
Whilst looking for fungi to photograph I chanced upon this unusual
'scaly' shrub and thought it sufficiently fulfilled the definition of scales.
I did find some fungi too! 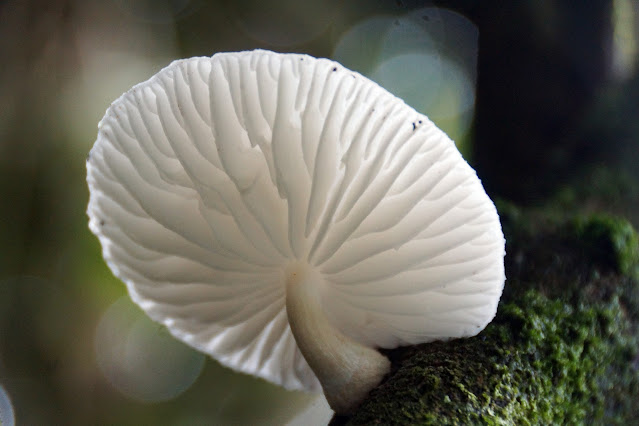 And how beautiful is this tree stump with its scaly pattern! 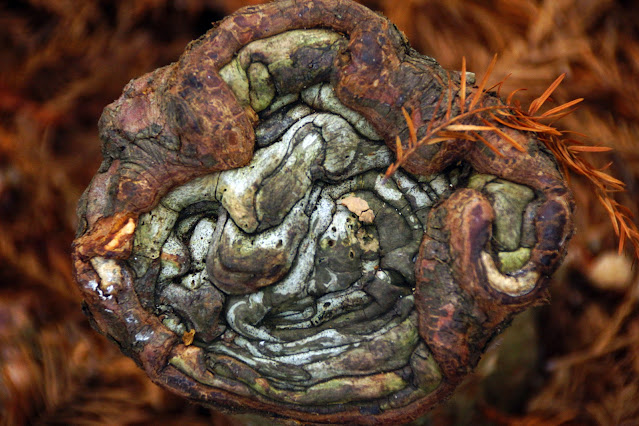 I was fortunate enough to have planned a visit to the zoo too.
Plenty of scaly critters there,
but this Galapagos Tortoise was my favourite. 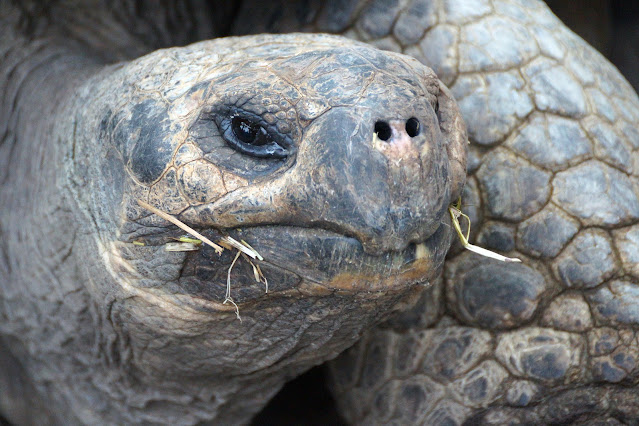 and I loved the colours of the chameleon. 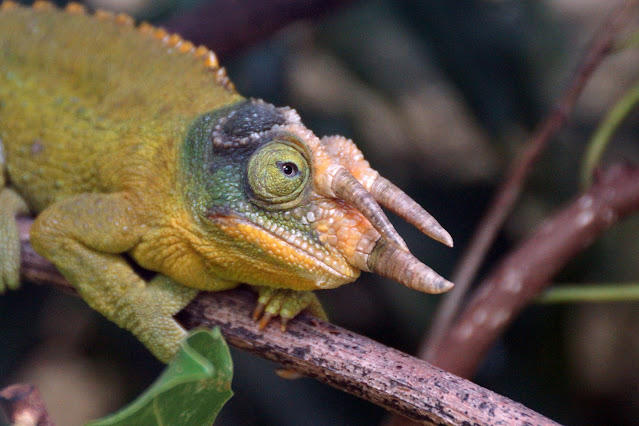 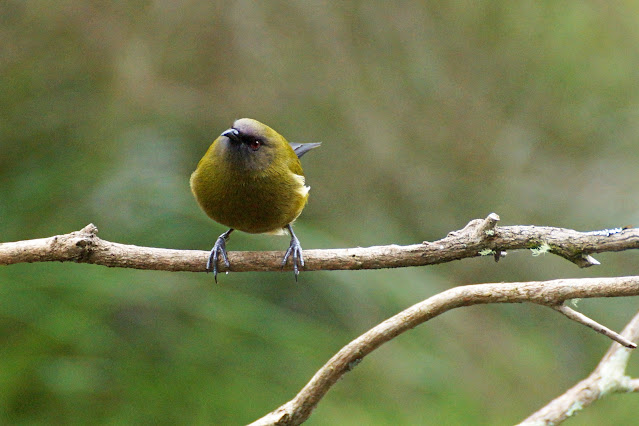 I have SO many favourite critters!
Choosing only to focus on one has been so difficult.
I decided to go with a bird endemic to New Zealand,
as opposed to some of my favourite 4-legged critters that come from Africa. 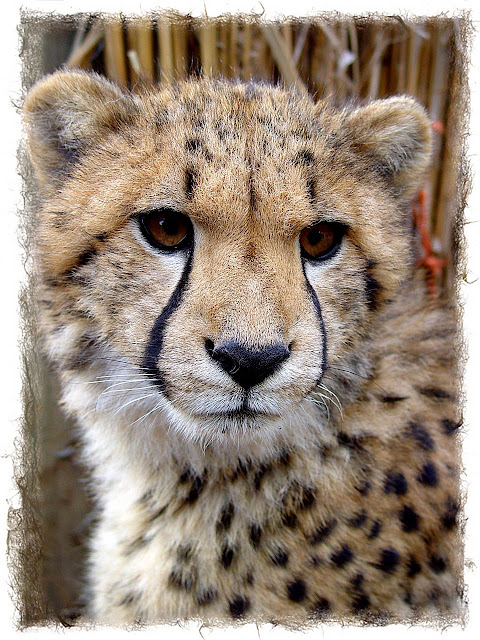 I occasionally hear these native soul-singers during my early morning walks.
They add the most glorious bell-like sound to that early morning dawn chorus. 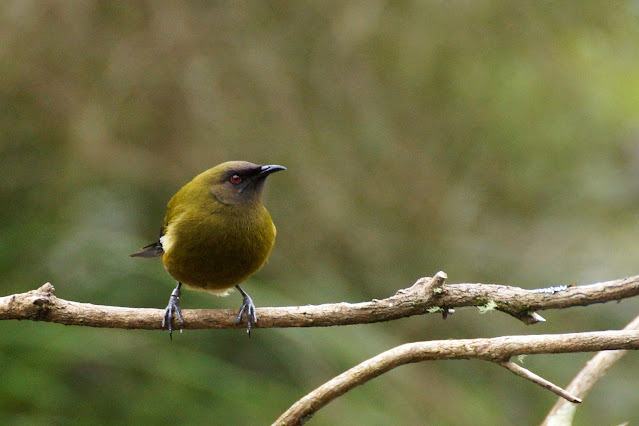 I’m talking of course of the lovely green Korimako (or Bellbird for my non NZ-friends)
With their olive green colouring and notable red eye,
they’re easily identified when you find them.
Sadly I don’t see them too frequently as they tend to be rather shy. 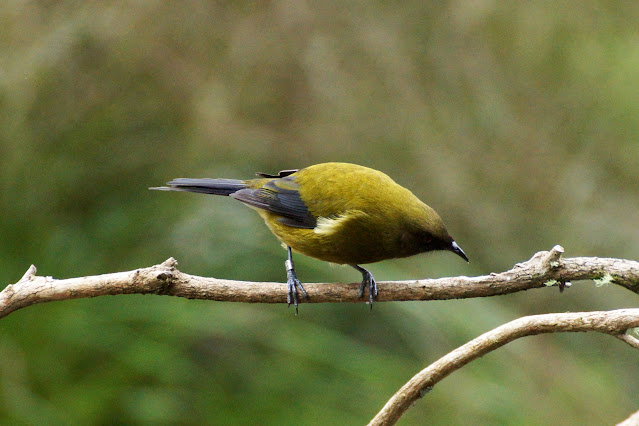 Despite having a nectar feeder in my garden I haven’t been lucky enough to attract them there yet.
Living in a built-up semi-industrial area doesn’t always lend itself to forest-dwelling birds.
It’s early days for the nectar feeder though, so fingers crossed. 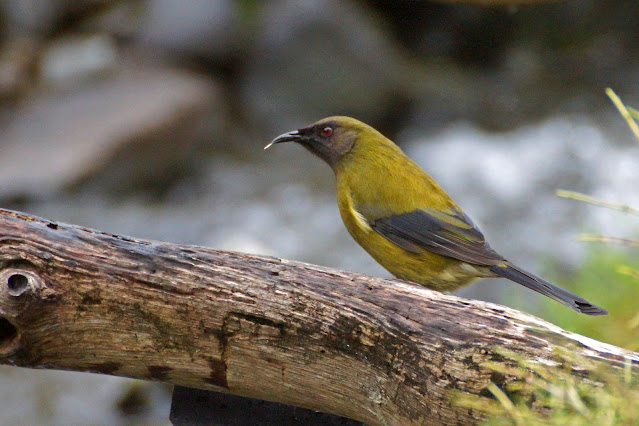 As with so many of our NZ birds, deforestation and the suburban sprawl have reduced their numbers in and around cities. I also hadn’t realised how important Beech trees are for honeyeaters. Small scale insects live within the bark of the Beech tree and excrete excess sugar in the form of honeydew. It’s a food resource that’s available all year round so is especially useful to Tuis and Bellbirds when nectar is scarce. 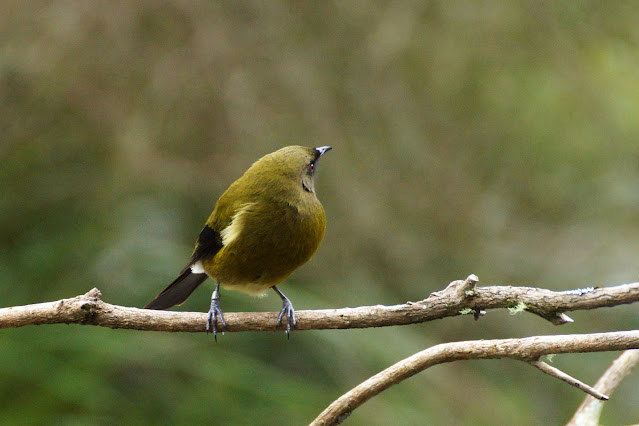 Unfortunately for Bellbirds foreign wasp species have also discovered honeydew and,
in areas where these wasps have been found,
there can be a huge reduction in the amount of honeydew available.
That means no year-round food for Tui and Bellbirds,
and fewer beetles and moths as they also feed on the honeydew.
Less birds in the bush = less birds contributing to the dawn chorus.
“The dawn chorus sends a euphoric message to the world, day in, day out.
I am alive!”
~ Amelia Dashwood
at June 05, 2020 No comments:

Week 21: Before and After 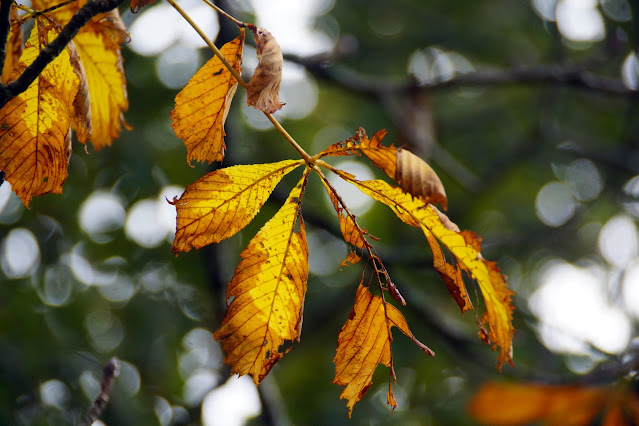 The rapidly disappearing autumn leaves are looking very ragged.
There’s a frailty about them that’s synonymous with aging.
As we age we all become more frail and autumn leaves remind me of that.
Autumn heading full-tilt into winter.

I’ll miss the leaves when they’re gone.
On these grey and overcast days their colourfulness
adds a blast of sunshine to the day.
Very necessary in the chill morning air. 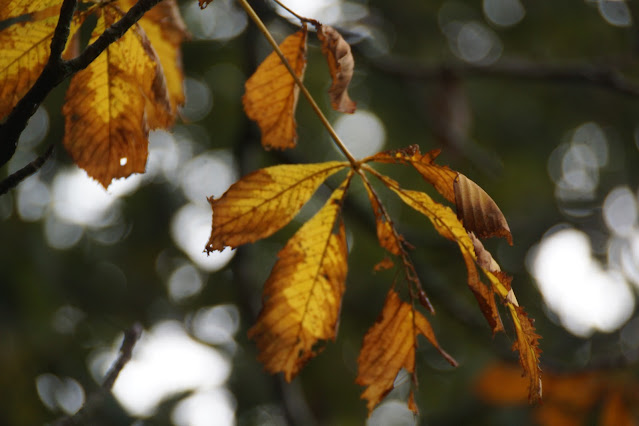 It was the chill in my fingers that affected the focus in this first image I shot.
The camera was on auto-everything but even an auto-everything
camera needs a steady hand for a focused image.
I’d wanted the torn leaves and their fragility to really stand out.
And they didn’t.
They’re dull and show no semblance of life. 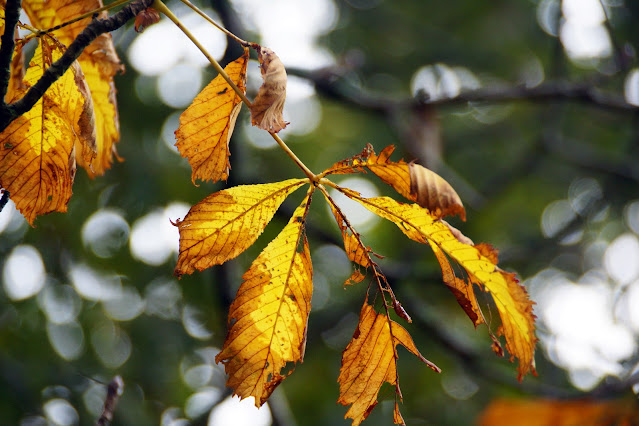 I warmed up the fingers before I took the second shot.
And upped the ISO a fraction.
I was much happier with the second image. 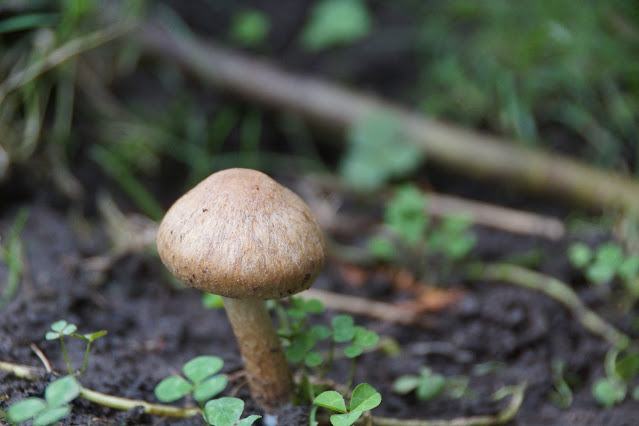 This first image I took of the mushroom was ok, but there was a lot of extraneous
background detail that didn’t need to be there.
It also didn’t show the colour of the mushroom as well as I’d have liked. 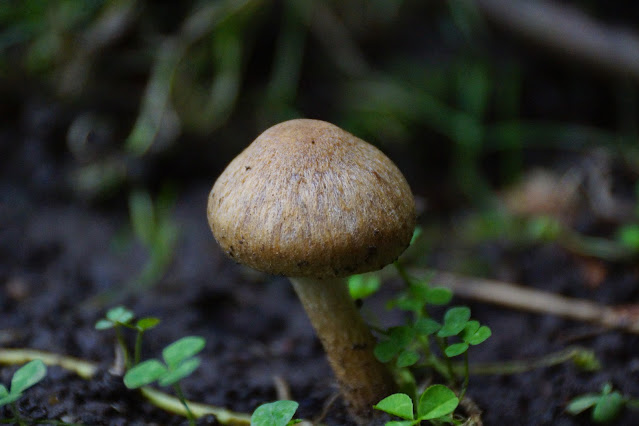 In the second image I’d reduced the aperture,
got down and dirty on my knees and moved in closer.
There’s more mood to the image and more colour.
There's always room for improvement and I love that this challenge is
encouraging me to think more about how and why I photograph what I do.

Sooo, when I started this challenge this year I didn't expect to be playing catch-up quite so frequently. A photo a week isn't onero... 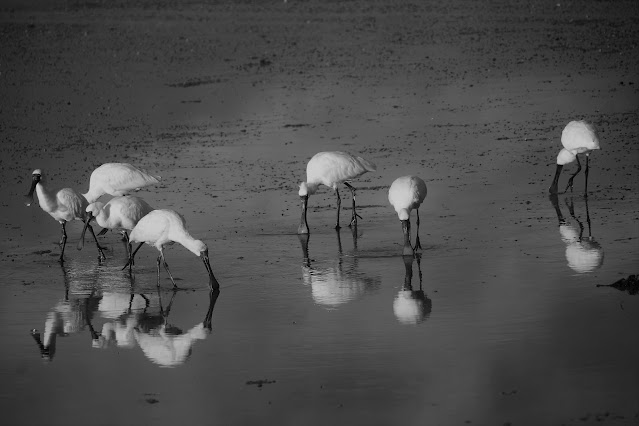